At the end of this last year, we were lucky enough to get three articles from two different local newspapers. They paid tribute to David thanks to Kalone, a musician living in Tarare, David Christie’s home town; I suggest you to find out the transcription of Kalone’s interviews through three posts. 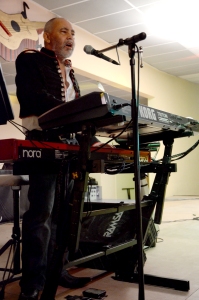 Kalone is a professional musician living in Tarare (Rhone- France). When he was four he lived in Normandy and used to listen in a continuous loop to the single of David Christie “Deux petites perles bleues” on an old record player (“Teppaz”) bought by his mother; when he was 29 ( in 1993) as his professional way drove him to Tarare he heard David (Jacques Pépino) was born in this town. The most amazing is that Kalone moved in the same street and very close to David’s house. Then he decided to pay tribute to him and worked eighteen months on this project.

Michel Etienne, a professional photographer and David’s friend, living in Tarare too, talked a lot about him: he was at school with him and said that when he was very young he was already crazy about music. He used to hit his desk in the classroom with his rule to be a drum player. He danced and sang most of the time.

Kalone reminds that David composed titles for, and among others, Sylvie Vartan, Demis Roussos, Joe Dassin, Morris Albert, Gloria Gaynor, Grace Jones.He composed the famous ” I love To Love” for Tina Charles and had an international personal hit with “Saddle Up”. David was an artist who made nice things for music he had a French and International career.

Tarare is his home town, but nevertheless, his career is never mentioned here; he was an all round artist who furthered music, mainly Disco. He invented a new groove, not old fashioned today, that we can still hear on many titles today.

link of the newspaper “Le Progrès” below :

with the courtesy of Kalone, Michel Etienne and Jacques Vignon

This site uses Akismet to reduce spam. Learn how your comment data is processed.